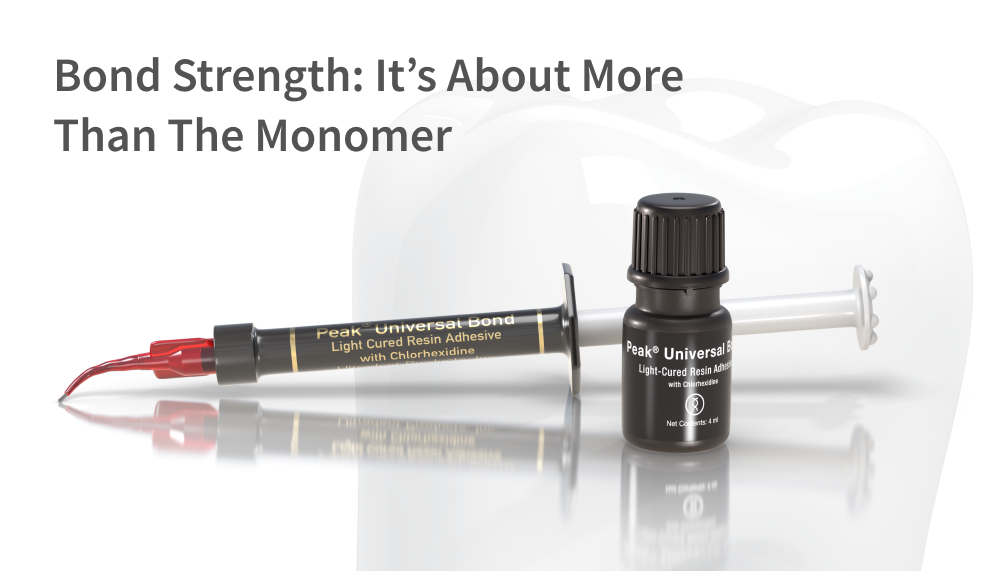 Bond Strength: It’s About More Than The Monomer

Recent articles suggest that there is a certain monomer responsible for quality bonds, but the truth is that the strength of a bond lies squarely in the balance of the chemistry of the product, rather than just one “magical ingredient.” Neil Jessop, Director of Research and Development for Ultradent Products, Inc. says, “It isn’t one specific monomer that promotes such high-level bond strengths, but the balance of chemistry and a synergy of components working together that affords stability, repeatability, and reliable, long-term bonds.”

According to Jessop, the ultimate goal of adhesion should be to bond to the tooth structure at a similar strength of the tooth's own cohesive strength. “Since the strength of the tooth itself is between 70-100 MPa, an adhesive should be able to bond at about 70 MPa to be able to reliably reconstruct missing dentition to a level where normal oral function would be managed similarly on both restored and non-restored dentition alike,” he explains.

In order to create a top-performing adhesive, Ultradent painstakingly fine-tuned formulations through testing literally tens of thousands of bonds over a period of years. What emerged was Peak® Universal Bond, formulated with a unique in-house synthesized monomer as well as the right balance of fillers, solvents, and complementary monomers, which has resulted in a product that can consistently and reliably produce bond values that approach the inherent strength of dentin. Peak is formulated to provide a strong enough bond to enamel as well as dentin, be it with the ‘total etch’ or the ‘self-etch’ technique.

Of course, chemistry isn’t the only thing that creates good bonds. Bonding techniques play a vital role in whether or not a restoration will fail. Even the best chemistry is no match for a poor bonding technique. It is vital that the dentist follows the products instructions for use and maintain control and visual supervision during the whole procedure. Bonding, as well as Light Curing, are the foundations to quality Adhesive Dentistry, yet sometimes these two key steps are overlooked.